Where to get A Warrior's Passage

The book trailer is coming soon 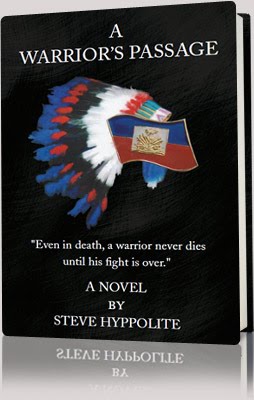 A modern day adventure which includes two cultures (Haitian and Native American) paralleled in the belief of the supernatural.

Christina Nightbird Little Wolf Cesar is transcended more by her Haitian and Native American backgrounds rather than by her unusually unique name. Her two backgrounds are two cultures paralleled in the belief of the supernatural. She is haunted by consistent dreams compounded with strange and mysterious pains that are rooted in a tragic time in her life. There are two murders, possibly linked to one another, being investigated by Officer Castillo that may have implications of danger for Christina.


It all comes to a head when the person who is the source of the dreams and pains makes their way to claim Christina’s life. She is protected by her loving mother, Claudia Little Wolf Cesar, who is of Haitian descent. Shilah Little Wolf, her uncle who is of Native American descent, juggles the tasks of getting revenge for his brother’s murder and risking his life to protect his niece. The protection she gets from her family is also in combination with help from her late father, whom she’s never met. Her best friend, Cecilia Cruz, treks on an adventure as Christina’s life continues to hang in the balance.


The indomitable power of the one who searches for Christina cannot be easily stopped by her Native American culture. They receive a small glimmer of hope from Madame Moise, a Haitian voodoo priestess. There is, literally, a race against time to save Christina’s life before it is too late.

Their Historic Past
Haitians fought in the American Revolution and had a very important hand in causing the Louisiana Purchase of 1803
In 1776 the 13 colonies of America declared their independence from the British Monarchy. War was declared from the British as they would not relinquish their hold over these colonies so easily. The southern opposition led in the exclusion of most black men in the American Revolution. The subsequent battles that occurred were not in favor of the newly found colonies. Victories towards their independence from the British were too few and far in-between. Their was a a group of free blacks from the neighboring island of Haiti who joined the Americans in their fight towards independence. They were Chasseurs-Volontaires de Saint -Dominique. The volunteer regiment of light infantry was made up of an estimated 545 "free men of color"-- making it the largest unit of men of African descent to fight in the American Revolution. In the months of September and October 1779, in the Siege of Savannah (Georgia) 300 Haitians lost their lives in this bloody battle. Over 60 of these Haitians were captured when Charleston, SC. fell to the British in May 1780. Many of these free men of color were made prizes of war and sold into slavery. A subsequent unit of Haitians took part in the successful allied (French and Spanish) campaign against Pensacola in May 1780 where they faced some of the same British regiments that their comrade's had faced in Savannah. The realities of war forced Congress and the states to reevaluate their policies towards slaves. A new Massachusetts constitution is endorsed asserting "all men are born free and equal," which includes black slaves. The 13 American colonies eventually became the 13 United States of America in 1783. The remaining Haitians (Chasseur-Volontaires de Saint Dominique) were sent back to no fanfare as ordered by Thomas Jefferson. This was done because they could not have freed colored men giving their domestic slaves any aspirations to want to be free, since they still sympathized with slavery. In October 11, 2009 the people of Haiti finally received the proper recognition, when a statue of those fallen Haitians was finally erected 230 years later in Franklin Park of Savanna Georgia.

Emperor Napoleon Bonaparte had a vision of a renewed western empire for France, though he was an ally of the newly independent United States he was devising a scheme that included the recapture of Louisiana from Spain. This Napoleonic France was an aggressive power and the close proximity would not be in the best interest of a young United States. In a letter to the American Minister to France, Robert R. Livingston, President Thomas Jefferson stated that, "The day that France takes possession of New Orleans...we must marry ourselves to the British fleet and nation." This was the British monarchy that they recently claimed independence from. Thomas Jefferson's efforts to purchase New Orleans was met with disappointment in October 1, 1800 as Napoleon signed the secret treaty of San Lidefonso with Spain, which retroceded Louisiana to France. Thomas Jefferson sent Robert R. Livingston to France in 1801 to purchase New Orleans, but Napoleon refused. At the time of Thomas Jefferson's failed attempts there was an on-going slave rebellion in Haiti against the French that started on August 22, 1791. This slave revolt culminated from the more than one-half million black slaves who were raided from their homelands in Africa. At the end of the 18th century, the Haitian people were at the helm of doing the impossible by breaking their chains of slavery from France. Many of these slaves took part in vodou ceremonies led by a Jamaican slave of African descent named Boukman. Hundreds of thousands of slaves set fire to plantations, torched cities and massacred a terrified white population. In 1793, Toussaint Louverture, a former Creole slave took charge of the poorly organized slaves and molded them into an efficient, disciplined fighting unit known for its guerrilla attacks. It was Toussaint's leadership that steered the revolution through a 12 year savage and rebellious three way racial war between whites, blacks, and mulattoes. Napoleon's plans to create a North American military base in the vast Louisiana territory was hindered by this Haitian Revolution. Napoleon's plan to make Haiti (Hispaniola) the keystone to his colonial empire, which was to serve as a rest stop and supply center for ships headed for the North American Continent was slowly falling apart. When the French army landed on Haiti, General Jean-Jacques Dessalines, under Louverture's leadership devastated "Le Grand Armee" by guerrilla warfare over a 22 month span. By November 1803, having lost more than 40,000 troops, France surrendered and was forced to leave the island. Napoleon's legendary army that beat Italy, Germany and Russia had been defeated by former slaves with no formal military training. The Haitian people fought for their God given right to be free of slavery. This was the most successful slave rebellion in history. Without the crown jewel (Haiti) of it's planned empire France saw the Louisiana Territory as a useless drain on it's resources. Napoleon sold the vast Louisiana territory to the United States on April 30, 1803, for about four cents an acre. For the United States, the Louisiana Purchase was a turning point the historical importance of which has been ranked "next to the Declaration of Independence and the adoption of the Constitution." Haiti ended up being the second independent nation in the Western Hemisphere. The United States which was the first to gain it's independence did it with the help of the Haitian people less than 20 years before. Haiti was the first black nation to gain their independence, but all other nations that sympathized with slavery did not approve of this. This was a bitter sweet moment in history as the slave baring nations which included France, Spain and even the United States started an unwritten embargo against Haiti that still effects the island to this day. Less than a decade after its independence, Haiti wanted to help it's neighbors in South America to gain Liberty as well. Haiti issued a call to anyone who wanted their God given right to be free of slavery from all slave baring nations. The call affirmed that any slave that set foot on the island of Haiti was granted their freedom. Simon Bolivar "The Liberator" who struggled to liberate his country of Venezuela from Spain heard the call as he learned of the small Haitian island's battle with France that led to their independence. Bolivar initially sailed to Jamaica to enlist British aid and was refused. Bolivar then went to Haiti, which was at the time under the Presidency of Alexandre Petion. Bolivar receive the sanctuary and protection that he needed. Petion gave Bolivar money, weapons, ammunition and even Haitian volunteer soldiers to help him fight for freedom. The only thing Petion asked in return was abolition of slavery in all the territories that he may later help to liberate. Simon Bolivar with the help of Haiti proclaimed Venezuela independence in 1812 and truly liberated: Colombia in 1819, Venezuela in 1821, Ecuador in 1822, Bolivia and Peru. It is even said that Bolivar had promised to Petion that as a gesture of gratitude that he will include part of the red and blue of the Haitian flag in the flag of the countries that he will gain independence for with Haitian help. Thus the reason for the red and blue in the flags of: Venezuela, Columbia and Ecuador. History even reports that both the Venezuelan and the Colombian flags were made in the port of Jacmel, Haiti. There is a statue of Haitian President/General Alexandre Petion immortalized on the Champ de Mars of Port-au-Prince, Haiti, where he is revered as the father of the Pan American movement, who helped Simon Bolivar to liberate South American countries such as Venezuela and Colombia.

* Certain excerpts are referenced from :

The Haitian Revolution and the Forging of America by Jim thomson

A Warrior's Passage by Steve Hyppolite

Coming soon : Pilgrims and their giving of Thanks to the Native Americans